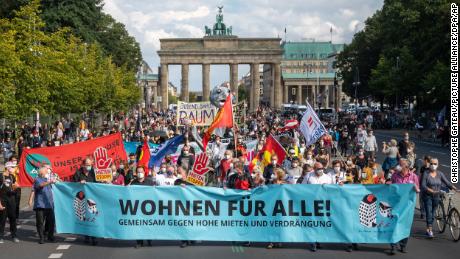 The residents of Berlin supported a referendum to socialize properties owned by the rich landlords to control skyrocketing housing and rental prices in Germany.

The berlin renters who make up roughly 85% of the population sought a democratic approach via a referendum after the 2020 rent cap was unsuccessful in the federal constitutional court. In April this year, Berlin’s constitutional court ruling found it unconstitutional to impose a rent cap that would overshadow the already existing federal laws in Berlin. A rent cap is a set limit of rent to be paid by renters

“For many of us, it feels like the end of a four-year marathon. Or at the very least, we’ve reached a major high point.” Kalle Kunkel, an activist told Euro News. The locals supported expropriation by 56% to 39%.

If the bill passes, private landlords who own more than 3000 units risk having some of their apartments folded into the city’s affordable housing stock. More than 240,000 apartments may be seized by the state.

Berlin’s parliament will have to debate the initiative not necessarily enact it. Its success would mean mass expropriation may face the same Berlin’s constitutional court that deemed the rent cap unconstitutional.

The campaign that is meant to curb gentrification is named after Deutsche Wohnen, a private landlord that held more than 110,000 apartments in Berlin.

Berlin was once known as Europe’s most affordable capital city until it experienced a housing crisis and rents began to double in the last decade. The referendum for many supporters is about ensuring Berlin is accessible to all, not just the rich.

Activists still have a long road ahead to make the referendum a reality.

The online involvement editor manages this author. The articles posted are associated with the various writers and editors for the involvement Newspaper.